The Nigerian fish market where gods and commerce meet

Folasade Ojikutu wears a traditional white lace dress for her work at the lagoon dock behind Oluwo market in Epe. The small town is home to one of the largest and most popular fish markets in Lagos – and almost all 300 traders are women. Many are from families who have sold fish here for generations, and Ojikutu, 47, is their “Iya Alaje”, meaning the mother or carrier of wealth.

As she strides past a small waterfront shrine, dozens of women fishing waist-deep in the water chant and hail her, calling out “Aje”- in part a reference to the Yoruba goddess of wealth. Every day, hundreds of people travel, sometimes for hours, to buy fish at Epe market, as it is commonly known, where the spiritual and commercial merge. And the mainly women traders look to Ojikutu– who acts as an intercessor, praying for good fortune, alongside managing affairs at the market.

The women that you see here, they do it all. When we sell, we eat, we feed our children
Bola Ajakorin, market seller

“It was the Ifá [Yoruba priest] that chose me, in 2016. He is the one that chooses the Iya Alaje,” Ojikutu says. Most markets in Lagos have an Iya Alaje, she explains, a market leader that is in some cases chosen by a priest, according to Yoruba tradition. “The day the Ifa came, I wasn’t here but he told them my name, my appearance, then they came and found me. I was panicking, weeping. I didn’t want it, I saw it as a burden. But the women insisted and here I am.”

In Nigeria’s complex religious landscape, blends of indigenous religions with Islam and Christianity are often demonised by mainstream clerics. Yet the enduring importance of traditional religious beliefs are seen in markets like Epe. For Ojikutu, a Christian in belief, and a Muslim by marriage who keeps two shrines in the market, there is harmony in her prayers to God and to Aje.

“This morning, [Ojikutu] prayed for us. That we will sell, that we will make enough to eat, to drink, to spend, to progress,” she says. “She will pray, and then we will shout, ‘ajeee oooooh’.” The women around echo her chant.

Ajakorin has sold fish at Epe for 30 years, taking over from her mother, whose parents were fishers, too. “It’s in our family to be here,” she says.

Like many of the women, she is the main breadwinner, supporting seven children and her retired husband.

“The women that you see here, they do it all. When we sell, we eat, we feed our children. Those of us that have mothers, fathers, we’re feeding them. Our siblings. That’s what we do.

“This job has been great for us, but it’s hard,” she says, describing how Africa’s largest economy has suffered in recent years.

Two recessions since 2016, rising food prices and the cost of living have pushed millions of Nigerians into poverty. “Things that people bought for 10,000 naira [£18] in Lagos are now 20,000 or 30,000 naira. Everything is expensive, so people have less money for fish than before,” says Ajakorin.

Mrs Abdullahi, 54, wears a green T-shirt and yellow wrapper and displays a fish almost as big as herself on her chopping board. “This one is even small,” she laughs.

Along the aisles, women cut and carry, some sitting high on top of freezers, peering down on their trays of fish and shrimp. They talk about how working at the market is in their blood.

“Since the time that I’ve been in school, I’ve been here, following my mother to the market,” says Abdullahi. “We’ve sent our kids to school, to university. And the little [money] that’s left, we’ve used for our car, our food, our home. You know the situation of the country. But we manage and we thank God.” 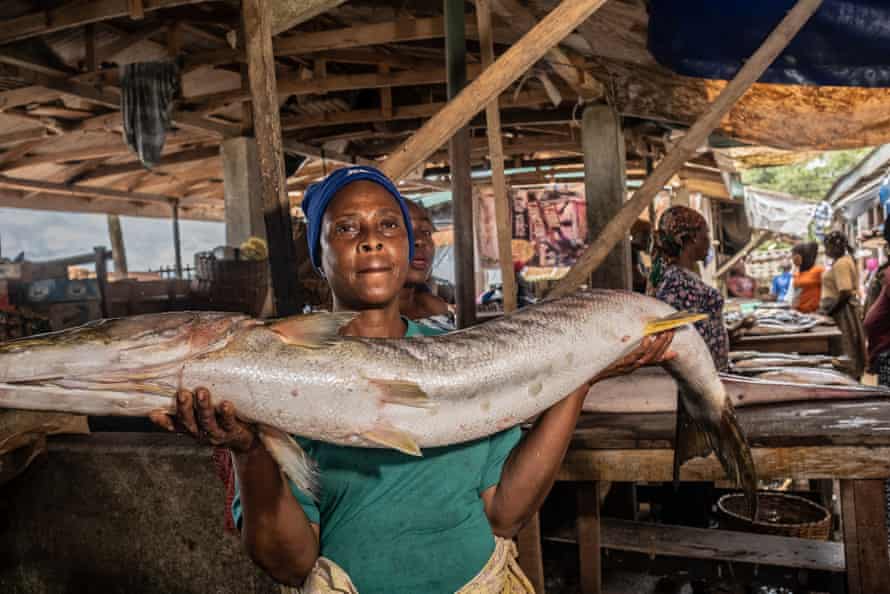 “Men go and kill the fish, even women go and kill, too, but mainly men. But it’s the women that buy it from them. Men look at it like it’s dirty work, but for us, it’s not dirty work.

“If I get my fish, I can sell it here. I can drive my car and take it to Ijora [a settlement in Lagos], call my customers and tell them what’s on the ground – orange fish, yellowtail, catfish, tilapia. I have that freedom to go here and go there.”

The hundreds of market women with deep roots to the area form a support network, says 50-year-old Lawal Bolanle, who has sold fish at Epe since she was 15. “We do many things,” she says, including ‘ajo’ – a communal saving system, where people put a monthly sum into a shared pot, and one person receives that amount on rotation. “We join hands and help each other in different ways.

“Among us, there are some who have other businesses. Let’s say a shop. They’ll open their shop. Then come here and sell fish, then go back, close their shop and go home. But most women in the market, we work and we don’t have anything else.

“Some have a baby but no husband. Or a husband who is sick or has died. But then you’ll come here, God will perform wonders, you’ll find food to eat, go home and attend to your children,” says Bolanle.

We support each other. You can find money and say to a woman, here, take a bit, source fish to sell, to help yourself
Lawal Bolanle

“We support each other. When an elder sister here comes to us and says she has a situation that is pressing, we will quickly call each other and say, look, we don’t want this situation to pull her to the grave. You can find money and say to a woman, here, take a bit, source fish to sell, to help yourself,” she says

The market women have been a strength, she says. “For example, my friend here, when she sells a lot, they will give me 4,000 naira, 5,000 naira. I’ll feed my children and keep some to buy fish to sell. Gradually, things are improving.”

Islamic prayer beads, bibles open to psalms, candles wrapped with palm leaves, are laid on top of freezers and tucked in corners, behind trays or buckets of live seafood across the market. While at a shrine kept at the quieter far end of the market, a sacrifice is made in a small ceramic pot as Ojikutu kneels on a mat to pray.

“Of course, many pastors, imams, will say this is an evil practice,” Ojikutu says. “It’s the same God that we are worshipping. Everyone has a spirit. For some, their spirits will match together. Those with clean hearts, that work together, it’s from that which good things happen. That’s what we believe.”

Amazon given contract to store data for MI5, MI6 and GCHQ

Federal government bonds worth N225 billion would be auctioned today, Monday, June 20, 2022, by the Debt Management Office (DMO) at the primary market.

The debt instrument is being sold by the central government to raise funds to finance the 2022 budget deficit and in today’s exercise, the DMO is offering the notes in three tenors.

The debt office is anticipated to sell the FGN bonds at double digits to make the asset class more attractive to investors.

In a circular published on its website and obtained by The Harmattan News, all three maturities are re-opening, meaning they are from the previously sold bonds.

Intending subscribers would be expected to reach out to primary dealer market makers to buy the bonds for N1,000 per unit subject to a minimum subscription of N50 million and in multiples of N1,000 thereafter.

The interest would be paid by the government semi-annually, while the bullet repayment will be done on the maturity date.

Nigeria’s debt servicing bill has increased by 109 per cent to N896.56bn, findings by The harmattan News have shown.

As a result, the country has also spent N3.83tn on debt servicing payments in 15 months, according to data obtained from the Debt Management Office.

Nigeria’s debt position worsened in the first quarter of this year as the country’s debt stock rose by N2.04trn to hit N41.60tn from the N39.56tn recorded as of December 2021.

Speaking at the launch of the World Bank’s Nigeria Development Update titled ‘The urgency for business unusual,’ held recently in Abuja, the Minister of Finance, Budget and National Planning, Zainab Ahmed, had expressed concern that the fuel subsidy regime was hurting Nigeria’s ability to service its debts.

She said, “Already we have borrowing increasing significantly and we are struggling with being able to service debt because even though revenue is increasing, the expenditure has been increasing at a much higher rate so it is a very difficult situation.”

The International Monetary Fund had warned that debt servicing might gulp 100 per cent of the Federal Government’s revenue by 2026 if the government fails to implement adequate measures to improve revenue generation.

According to an IMF official, based on a macro-fiscal stress test that was conducted on Nigeria, interest payments on debts may wipe up the country’s entire earnings in the next four years.

Aisen said, “The biggest critical aspect for Nigeria is that we have done a macro-fiscal stress test, and what you observe is the interest payments as a share of revenue and as you see us in terms of the baseline from the federal government of Nigeria, the revenue almost 100 per cent is projected by 2026 to be taken by debt service.

“So, the fiscal space or the amount of revenues that will be needed and this without considering any shock is that most of the revenues of the federal government are now, in fact, 89 per cent and it will continue if nothing is done to be taken by debt service.”

The Washington-based institution said this in a statement issued after completing a series of meetings between its team led by Jesmin Rahman, mission chief for Nigeria at IMF, and Nigerian authorities.

The meeting was held on June 6 and 10, 2022, and discussions centred on recent economic and financial developments and the economic outlook for the country.

“Regarding the economic outlook, GDP growth is projected at 3.4 percent (y/y) in 2022 while inflation is expected to remain elevated,” the statement reads.

“The fiscal deficit of the consolidated government is expected to remain high at 6.1 percent of GDP due in great measure to costly petrol subsidies and limited tax revenue collections.”

Nigeria’s inflation reached 17.7 percent in May, led by a renewed surge in food prices exacerbated by the war in Ukraine.

“Economic recovery continues to gain strength on the back of services and agriculture with GDP growth reaching 3.6 percent (y/y) in Q1 2022,” the statement adds.

“Regarding the external sector, the current account deficit narrowed significantly in 2021, helped by import compression and higher net oil balance.

“However, the improving trade balance, which has continued so far in 2022, is having a limited impact on Foreign Exchange (FX) strains with the exchange rate premiums in the parallel market staying in the 35-40 percent range since October 2021.

It listed downside risks in the near term to include further deterioration of security conditions, elections, low vaccination against COVID-19 and higher global interest rates.

On the upside, the IMF said steady private sector recovery and further broadening of growth, the start of operations at the Dangote Refinery and decisive steps to mobilise revenues, in line with the strategic revenue growth initiative (SRGI), could spur inclusive growth and development.

Gov Masari vows not to surrender to bandits in Katsina

ASUU: Ngige lied — we were not invited to any meeting on Thursday

Gov Masari vows not to surrender to bandits in Katsina

ASUU: Ngige lied — we were not invited to any meeting on Thursday