NDLEA’s spokesman, Femi Babafemi, disclosed in a statement on Sunday that Mgbeobuna was arrested on Saturday 6th Aug following his arrival from Addis Ababa, Ethiopia onboard an Ethiopian airline flight.

The suspect who hails from Idemili South LGA, Anambra state passed out the 77 wraps of the illicit drug in eight excretions spanning four days.

In a similar development, three suspected drug peddlers in Kaduna: Saifullahi Sani, Salisu Nafi’u and Abdulrazaq Mamman, were arrested in Zaria on Thursday 11th August with One Million One Hundred and Twelve Thousand Three Hundred and Fifty (1,112,350) tablets of Tramadol (225mg and 100mg) weighing 38.3kg.

Meanwhile, in Kano, a female drug dealer, Saratu Abdullahi, 28, fromWurno council area of the state was nabbed at Hotoro with 541 blocks of cannabis weighing 245kg. 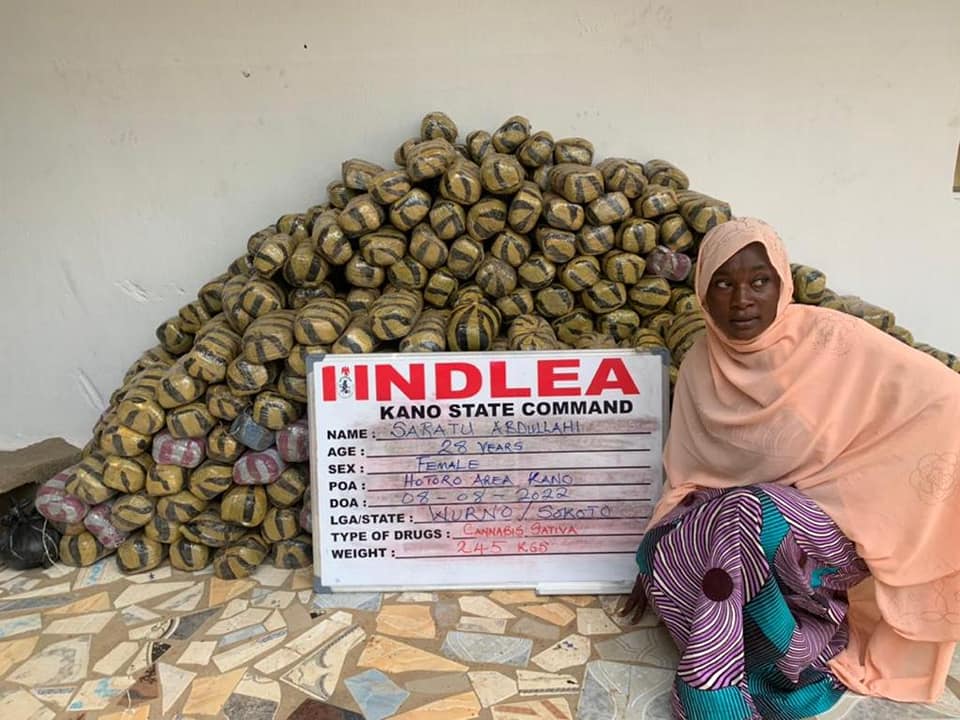 Similarly, in Lagos, NDLEA operatives recovered a total of 1,773.25kg cannabis sativa at Ebutte-Meta and Akala in Mushin areas of the state in separate raid operations between 9th and 10th Aug.

At the Tincan seaport in Lagos, 86 parcels of cannabis indica (Colorado) weighing 43kg were recovered from a 40ft container during a joint examination with Customs and other security agencies.

The illegal consignment seized on Friday 12th Aug came from Toronto via Montreal, Canada and concealed in two drums inside a Mercedes Benz SUV in the container.

In Abia, two suspects: Nnanna Ijo, 58, and Orji Uguru, 29, were arrested on Friday 12th Aug. with various quantities of cannabis, heroin and cocaine at Nde-Agbai, Abiriba, a week after Nnanna was released from detention over a similar offence committed in June.

While commending the officers and men of MMIA, AIIA, Tincan, Kaduna, Kano, Lagos and Abia Commands of the Agency for the seizures and arrests, Chairman/Chief Executive of NDLEA, Brig. Gen. Mohamed Buba Marwa (Retd) charged them and their compatriots across the country to always remain steps ahead of the drug cartels.

Magistrate S. A. Adesina sitting at an Iyaganku Court, Ibadan, has ordered that 20-year-old Wasiu Toheeb, be remanded in custody for allegedly raping a 40-year-old woman.

Toheeb, who was also charged with assault and theft, however, pleaded not guilty.

Adesina, refused to take Toheed’s plea for want of jurisdiction and directed the police to take the case file to the Oyo State director of public prosecutions for advice.

Adesina adjourned the case until Nov. 24 for mention.

The prosecutor, Insp Gbemisola Adedeji, told the court that the defendant raped his victim on Sept. 18 at 1.00 p.m. at Omi-Adio, Ibadan.

Adedeji also alleged that the defendant, on the same date, time, and place, assaulted his victim by biting her all over the body, causing her grievous bodily harm.

According to the prosecutor, Toheeb also stole a pair of earrings worth N5,000 and cash of N7,500, from the victim.

Governor Chukwuma Soludo of Anambra state  has condemned the killing of soldiers in Umunze by yet-to-be-identified gunmen.

In a statement by his Chief Press Secretary, Christian Aburime, Soludo said the soldiers were ambushed on a routine patrol at Umunze by yet-to-be-identified gunmen.

“We condemn this wicked and cruel attack in the strongest terms. The perpetrators of this act must pay.

“We are not going to rest on our oars, including those people that attacked Senator Ifeanyi Ubah and the rest.

“There will be absolutely no hiding place for them.

“Going forward, our actions will show, as these people must surely pay for this heinous and repulsive attack”, the statement read.

Abiola Emmanuel, 22, has been sentenced to two years imprisonment by Justice Mojisola Dada of the Special Offences Court, Ikeja, Lagos State for fraud.

Emmanuel  arraigned on one count of retention of proceeds of crime.

The charge read, “That you, Abiola Emmanuel, on or about March 17, 2022, in Lagos, within the Ikeja jurisdiction of this honorable court, retained in your control the aggregate sum of $38,000, one HP Elite X2 laptop, one Navy Blue Hublot Fission wristwatch and one diamond encrusted Cartier Santos wristwatch, being proceeds of criminal conduct, deceitfully obtained from unsuspecting members of the public.”

The offence is punishable under Section 333 of the Criminal Law of Lagos State, 2015.

The defendant pleaded guilty to the charge.

The defence counsel, Z.A. Makinde, appealed to the court for mercy.

An official of the Economic Financial Crimes Commission, Michelle Wandoo identified the items recovered from the defendant at the time of arrest and they were tendered as exhibit.